Lightning struck for Anthony Linthicum on the eighth green at Weaver Ridge Country Club on Thursday, as he notched the first hole-in-one of his career. Linthicum was participating in a golf scramble for The Christian Center to raise money for the organization. It seems the Almighty was smiling on him, as Uftring Auto Group member Jim McComb Chevrolet was the sponsor of the eighth hole. His shot netted him a 2010 Chevy Malibu. Well, almost.

Linthicum was ineligible to win the 2010 Chevy Malibu from Jim McComb due to being listed as a “professional” with the United States Golf Association. As a consolation prize, Linthicum was awarded a trip to Hawaii including $1500 in expense money, five days of golf and a hotel. Upon hearing the news he was “speechless.” His wife had just mentioned to him a couple of weeks before that she would like to take a trip to Hawaii.

According to Linthicum, he had no special feeling about his shot before or even after he swung the club. “It was kinda hazy, you couldn’t see well,” said Linthicum. He didn’t even know the ball went in to the hole until Nate Mooningham, a witness down on the green and a driver for the Uftring Auto Group, raised his arms in elation.

Mooningham said the shot hit the edge of the green and rolled right in to the pin. He jumped out of his chair when he noticed the ball was heading for the hole, then walked over and confirmed the feat by raising his arms in the air. He wanted everyone to know what had been accomplished and that he didn’t interfere with the ball.

Linthicum started playing golf when he was eight years old. A Peoria native, he grew up by Madison Park Golf Course in West Peoria. As a child he would wait until it was nearly dark at dusk and then sneak on the course to play. He was given one golf club every year on his birthday; it took him until he was a teenager to acquire a full set.

Linthicum was simply trying to hit the center of the green with his shot. He was shocked when he arrived at the green and confirmed he hit a hole-in-one. The eighth green is reported to be a difficult hole, made even more challenging by the tough pin placement that day.

It didn’t phase Linthicum, a frequent Uftring customer. He has purchased four vehicles from the Uftring Auto Group in his lifetime, spread across Uftring Auto Mall and Uftring Nissan.

Further proof that Jim McComb Chevrolet’s sweet deals don’t stop at the lot, or even the continental United States. We at Uftring Auto Group wish the Linthicum’s the best on their trip to Hawaii!

The Peoria Journal Star also ran a story. Check it out! 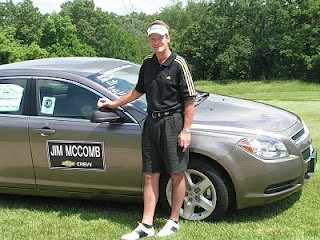 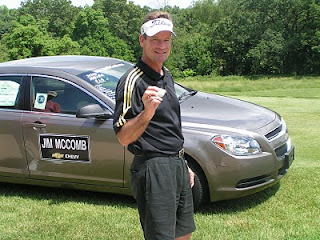