Randy Whitehurst of Creve Coeur just won this beautiful high definition 47" Vizio LCD television from Uftring Chrysler Dodge Jeep in Pekin! He was in the store the other week to order a manual for his Dodge Ram truck, when he noticed the raffle for the television. Whereas many people stuffed the box with multiple entries, Randy only entered once. 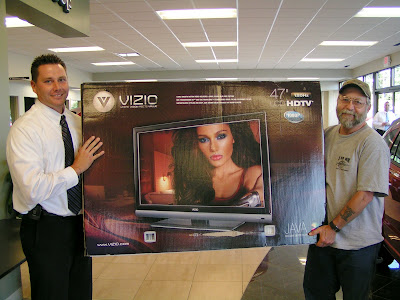 It was all he needed. He actually received the television before the truck manual. Guess he's got something to keep him occupied while waiting to learn more about that Dodge Ram! Plus he was able to put the Ram to good use as he loaded the 47" television in the bed of the truck and hauled it back home. Thanks to all who entered. Congratulations Randy! We hope you and your family enjoy that high definition goodness from Uftring Chrysler Dodge Jeep. Don't forget to come back for your Dodge Ram manual.
Posted by Uftring Auto Group at 10:41 AM